Update: RekogRobot now has a 3D printed chassis! I use a graspinghand mount for the camera module. 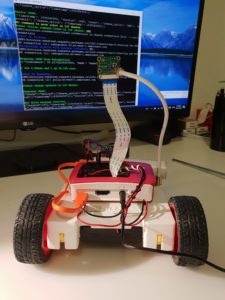 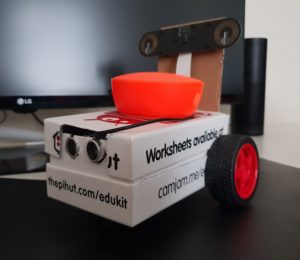 In part 1 of this two-post series, I showed you how I built a robot powered by Raspberry Pi that moves about on its wheels, looks at objects and speaks what it sees, using Amazon Rekognition, Amazon S3 and Amazon Polly services from Amazon Web Services (AWS). If you haven’t already read that post I encourage you to go back and have a read. This post builds additional capabilities to that robot – letting you control the robot’s movement and functionality using your own voice or text using an Amazon Lex chatbot. Lex is the same technology behind Amazon Alexa that powers your Amazon Echo devices.

Let’s take a look at the high level design of how this looks like (and recap on some basics): 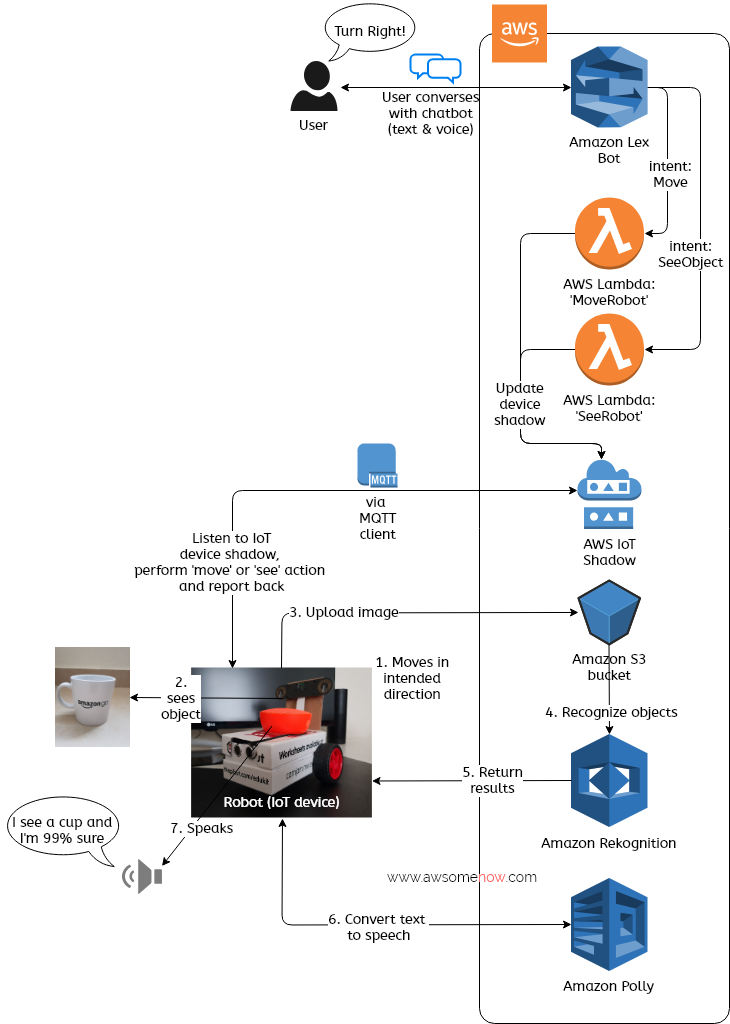 An introduction to the main components

In addition, the robot is configured as an IoT (Internet of Things) device on AWS IoT. This allows the user to securely and reliably issue commands to remotely control the robot.

AWS Lambda lets you run code without provisioning or managing servers (serverless computing). You pay only for the compute time you consume – there is no charge when your code is not running. In this project, we just upload our python code and Lambda takes care of everything required to run and scale our code with high availability. Lambda supports multiple other languages and you can include libraries as well. In our project, MoveRobot and SeeRobot are both Lambda functions written in Python 3.6.

I have made all the code available as a package for download so you can start building right away.

When you extract the package you will find three folders: 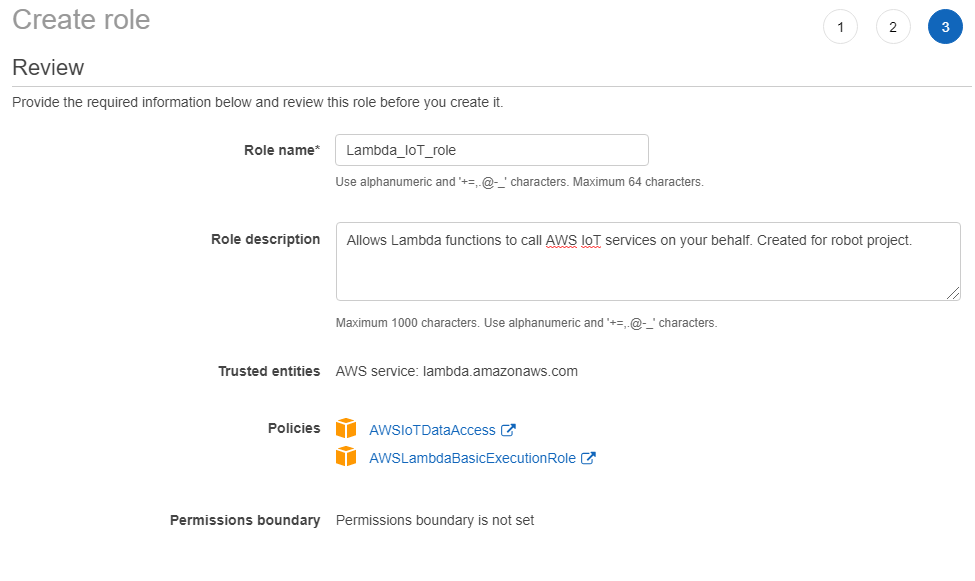 You will need to create two Lambda functions – MoveRobot and SeeRobot.

MoveRobot: Called by the Lex bot that you will create when it determines the intent of the user is to make the robot move. The Lex bot will have a slot named ‘Direction’ which will contain the intended direction of travel for the robot (Left, Right, Forward, Backward, Stop). The MoveRobot Lambda function will update the IoT device shadow for the robot so the shadow listener code on the Raspberry Pi can read the updates and perform actions.

Explanation of the code

For convenience, I have commented the code with details in the gist below. Feel free to post a comment if something isn’t clear.

You’ve now created two Lambda functions MoveRobot and SeeRobot. Let’s see how we can tie this up together with Lex.

While configuring your Lex bot, if you come across the below error, you may need to edit your Lambda function policy.

You can manually edit the function policy using the AWS Command-line interface (CLI) by using the following commands:

Preparing your robot on the Raspberry Pi

These steps assume you’ve successfully built the robot as per the instructions in Part 1.

You will need python3 to run the supplied code. You would already have python3 installed on your Raspberry Pi if you completed Part 1. Just a reminder – you can install python3 by typing sudo apt-get install python3

You also need to install the following packages:

The following packages are also required, but you’d already have these installed if you completed the steps in part 1 of this series.

To install a python3 package, make sure to use pip3. Example: pip3 install paho-mqtt

Copy the credentials to the ‘thing’ (the Raspberry Pi)

Create a directory where you want to run the Python script on the Raspberry Pi. Copy the thing certificate, private key file, public key file and root CA certificate .pem file that you obtained when you created your thing on the AWS IoT console.

Setting up the environment variables

Type the following commands to set the OS environment variables on the Raspberry Pi.

You are specifying the path/file names of the thing certificate, the private key file, the public key file, the root CA pem file, the thing shadow https endpoint (MQTT host), the default port numbers, the thing name and client ID that you configured in the AWS IoT console.

Copying the script to the Raspberry Pi